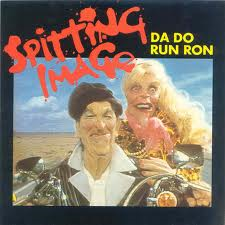 The first single from Spitting Image, released in 1984, was a rework of the Crystals' "Da Doo Ron Ron".[33] The Spitting Image version, "Da Do Run Ron", was a spoof election campaign song for Ronald Reagan, featuring Nancy Reagan listing reasons why "you gotta re-elect him", with lyrics like "Yeah! He can really act, Yeah! He lowered income tax, Yeah! He hates the Warsaw Pact". The cover of the single featured Reagan as a biker with Nancy riding pillion. The puppets of Ant and dec sings two wet gits and now on top of the pops along with the chicken song and da do run Ron

Retrieved from "https://spittingimage.fandom.com/wiki/Da_Do_Run_Ron?oldid=5019"
Community content is available under CC-BY-SA unless otherwise noted.